Game Changing Skills for the Family Farm in Chile!

When you live on a working farm, there’s always something to fix or improve. It’s nice to know who to call for a quick fix, but what if it’s hard to find help? Facing a shortage of skilled labor where they live, Charles Whiting, his wife Kristen and daughter Anna decided it was time take action, even face a few of their fears, and learn a new skill.

While the Whiting’s story may sound familiar to other small family farmers in the states, their story has a bit of a twist. Their family farm is in South America. Charles talks about finding help, “We have a farm in Chile and it’s very remote. There’s no road that goes to it, so it’s very difficult to get things out there and very difficult to get people to fix things, so we pretty much have to do most things ourselves as much as possible.” Because it’s a farm, things break and require repair. This includes a lot of welding projects. “We just kind of developed a backlog of things that needed to be welded. I could never find anyone to do the welding so I finally decided I’m just going to have to learn how to do this.”

Over the last several years, the Whiting family has experienced a new culture, learned a second language, and as Anna, age 17, puts it, “I love it down there. I wouldn’t have it any other way.” As a family, it’s clear there’s a strong spirit of adventure. It shows in their response as Charles brought up the idea of a welding class. They said, “Hey, we want to do that too!” 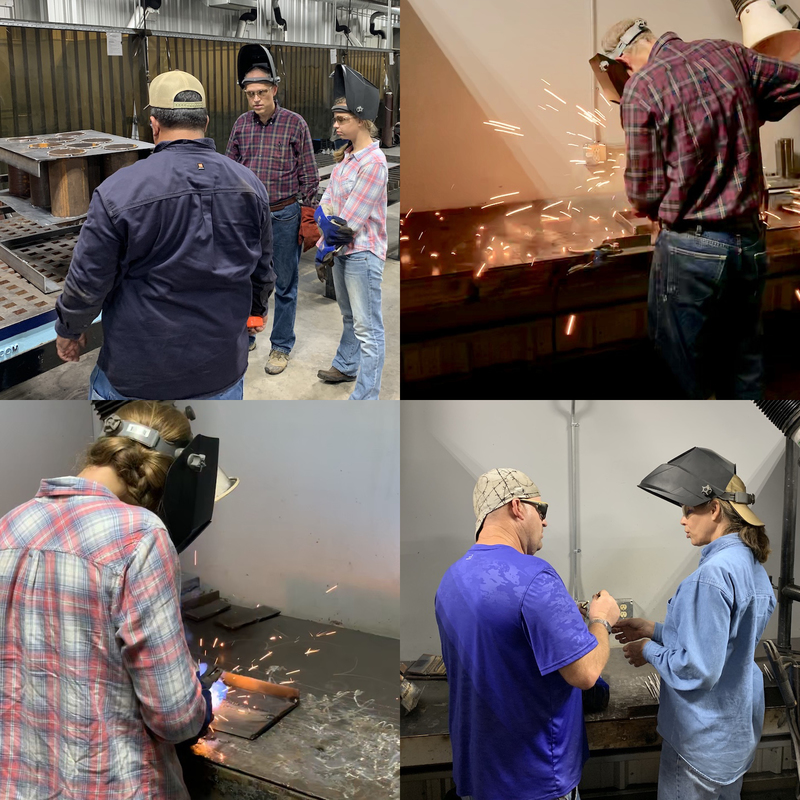 Talking about a few of the highlights of the class, Kristen said, “Mr. Tuley and Mr. Ake just have gone out of their way to think of things we could use. Saying, ‘you guys could learn to cut with a torch.’” The course has been even more helpful than she imagined it could be. “They just have really gone out of their way to think what would be practical, what would be usable. Mr. Ake brought a welding machine that was smaller and that has arc, and MIG, and TIG, so that we could see how it felt and they’ve just been very very helpful.” This machine was also capable of using a flux core rod commonly used when field welding.

While information is important, and the class certainly covers a wide range of knowledge required to weld correctly and safely, students find the hands-on nature of the class to be most helpful. “I thought I was going to learn how to stick weld and that’d be about it. I thought we’d be sitting in the room listening to lectures half the day and welding a little bit, but we spent two days learning to stick weld, and very little time lecturing. It’s mostly been hands-on, which I appreciate. They showed us how to do it safely, which is what I was really looking for,” Charles said.

The family were all excited about learning many different skills. From MIG, TIG, and stick welding to cutting with a torch, they were able to pick up skills they weren’t anticipating when they enrolled in the class. Kristen shared, “We’re not farm people and we’ve been over our heads for a long time and this is a real game changer for us. This is going to make life just so much better.” Anna agreed, “My favorite part of the whole class is that they taught us to do everything. Instead of just one thing, so now even if I’m not really good at it, I know where to start learning from. It was really hands-on, which I appreciated.”

Originally from the United States, the Whitings have maintained their home base in Ada, Oklahoma for nearly two decades. So, when they decided to add welding to their tool box of skills, PTC was the logical choice. PTC is thrilled to have been a part of the Whiting family adventure and invite everyone in our district to find their own adventure!