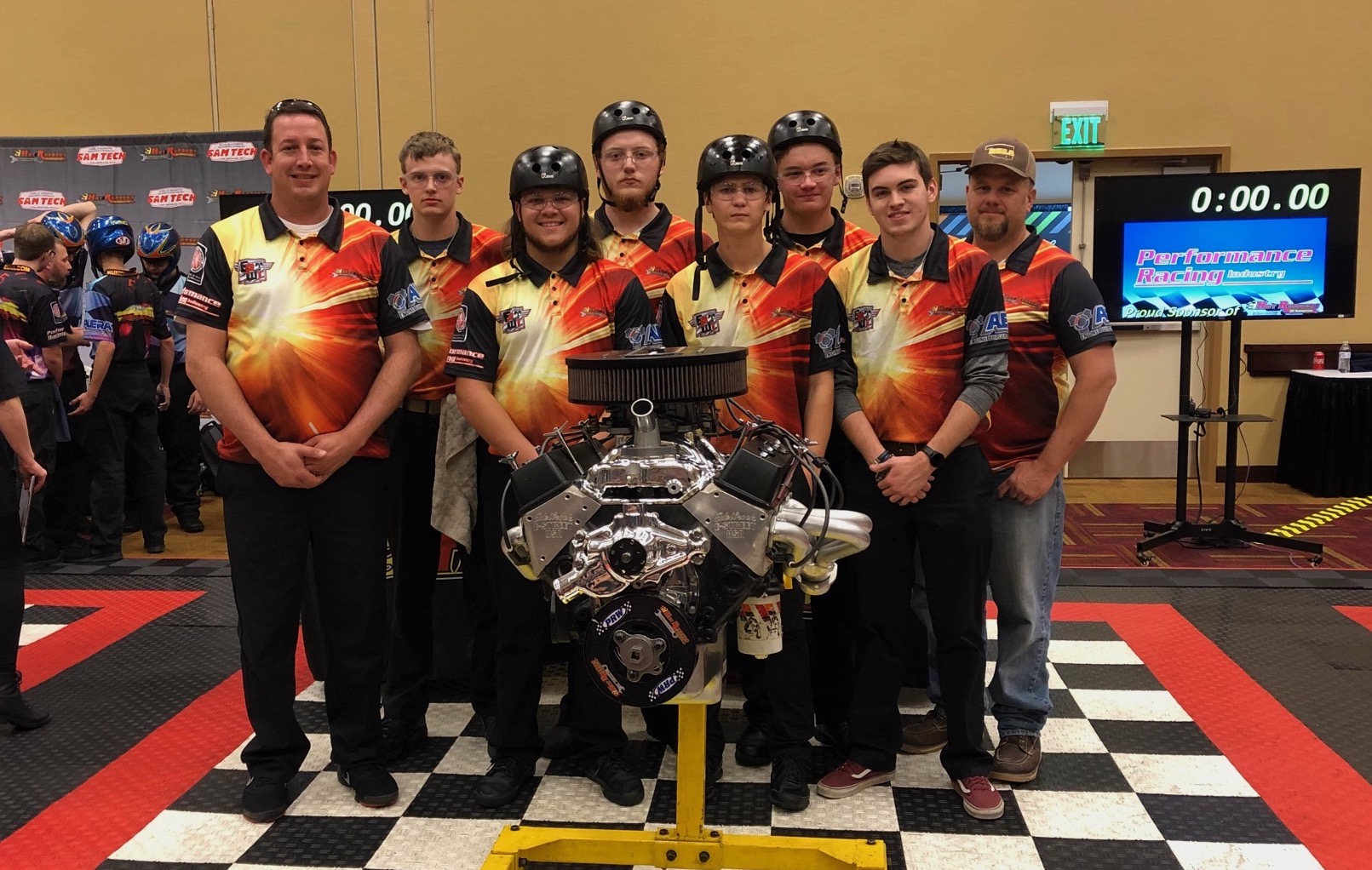 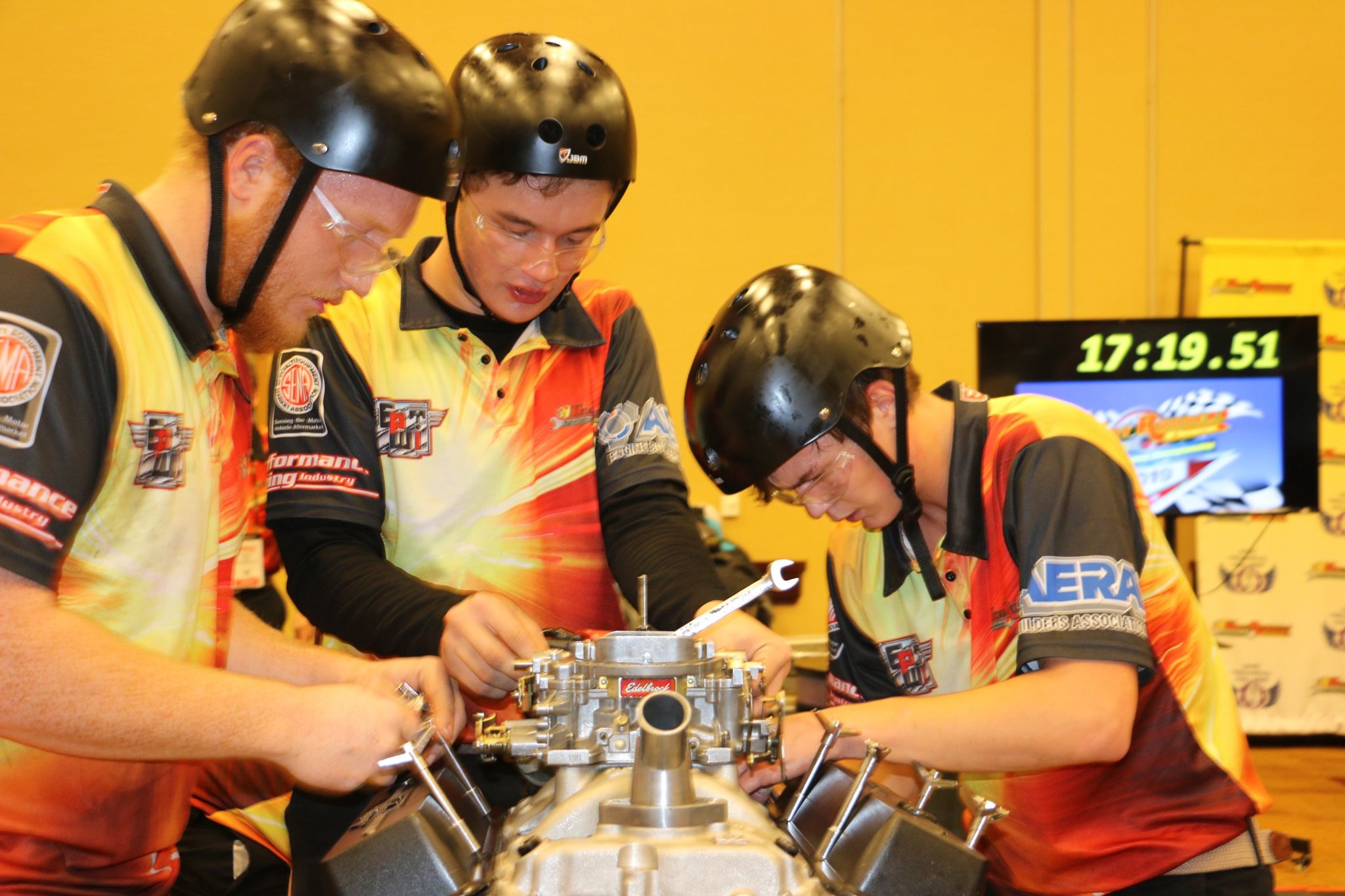 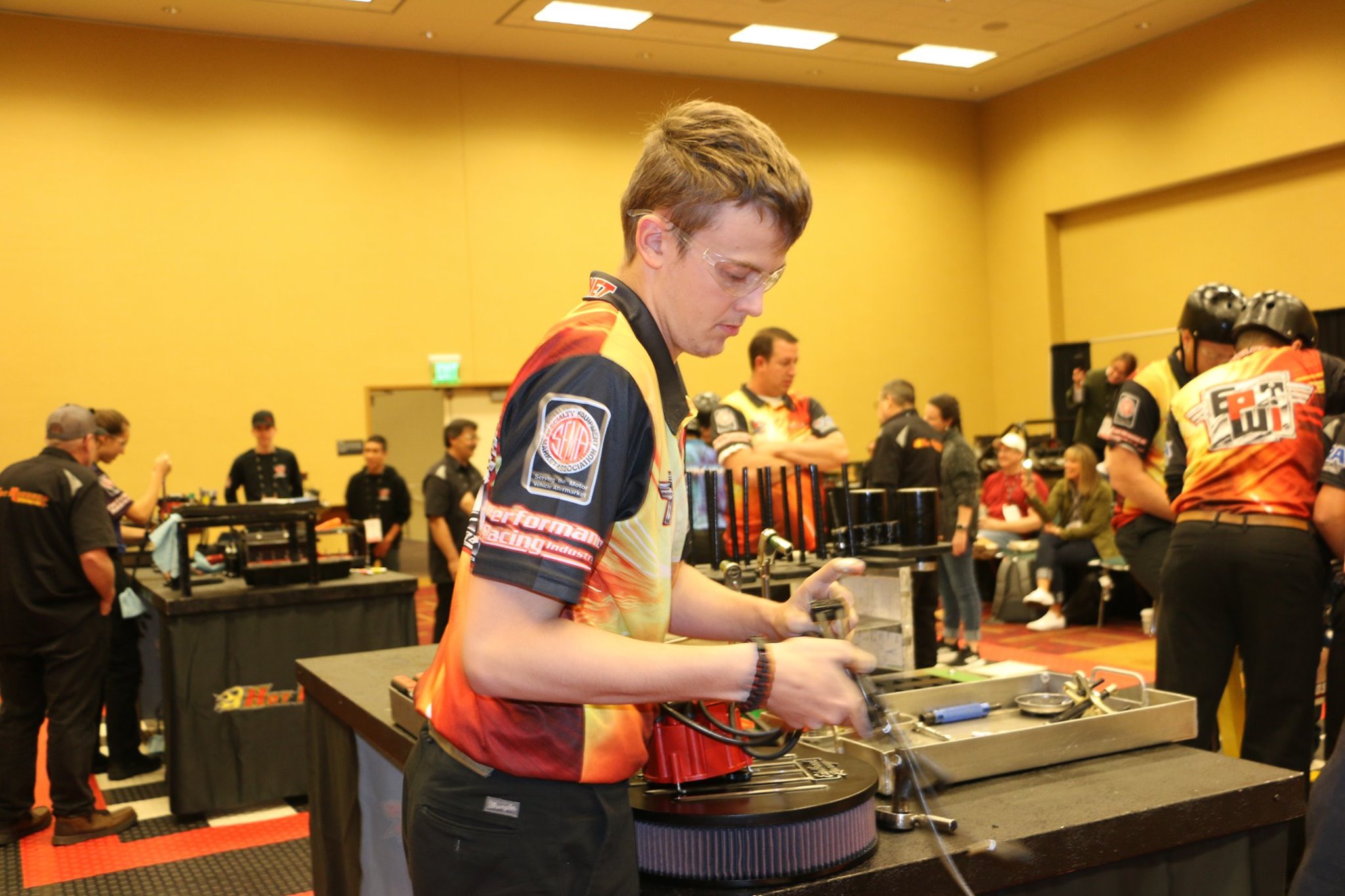 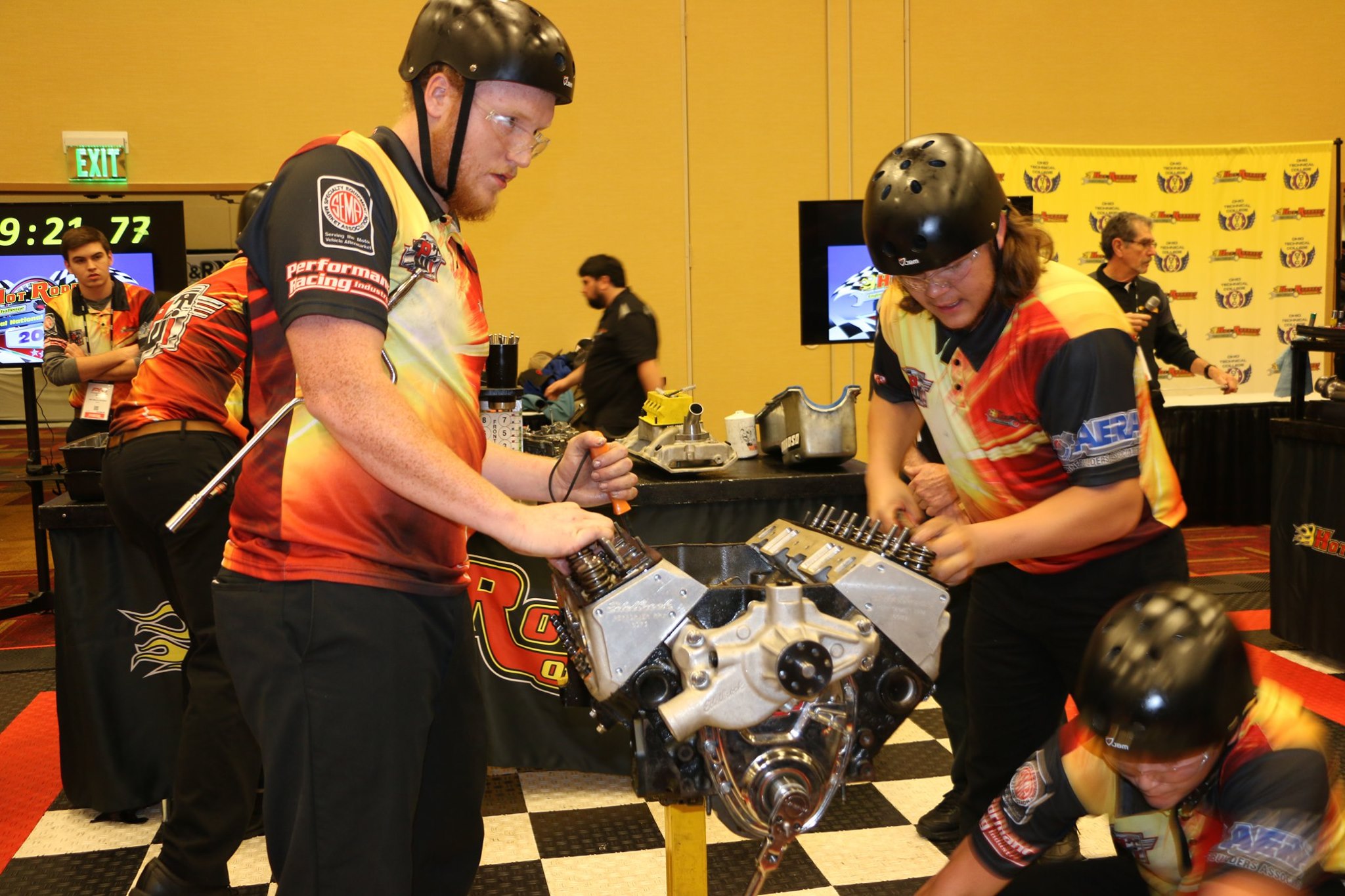 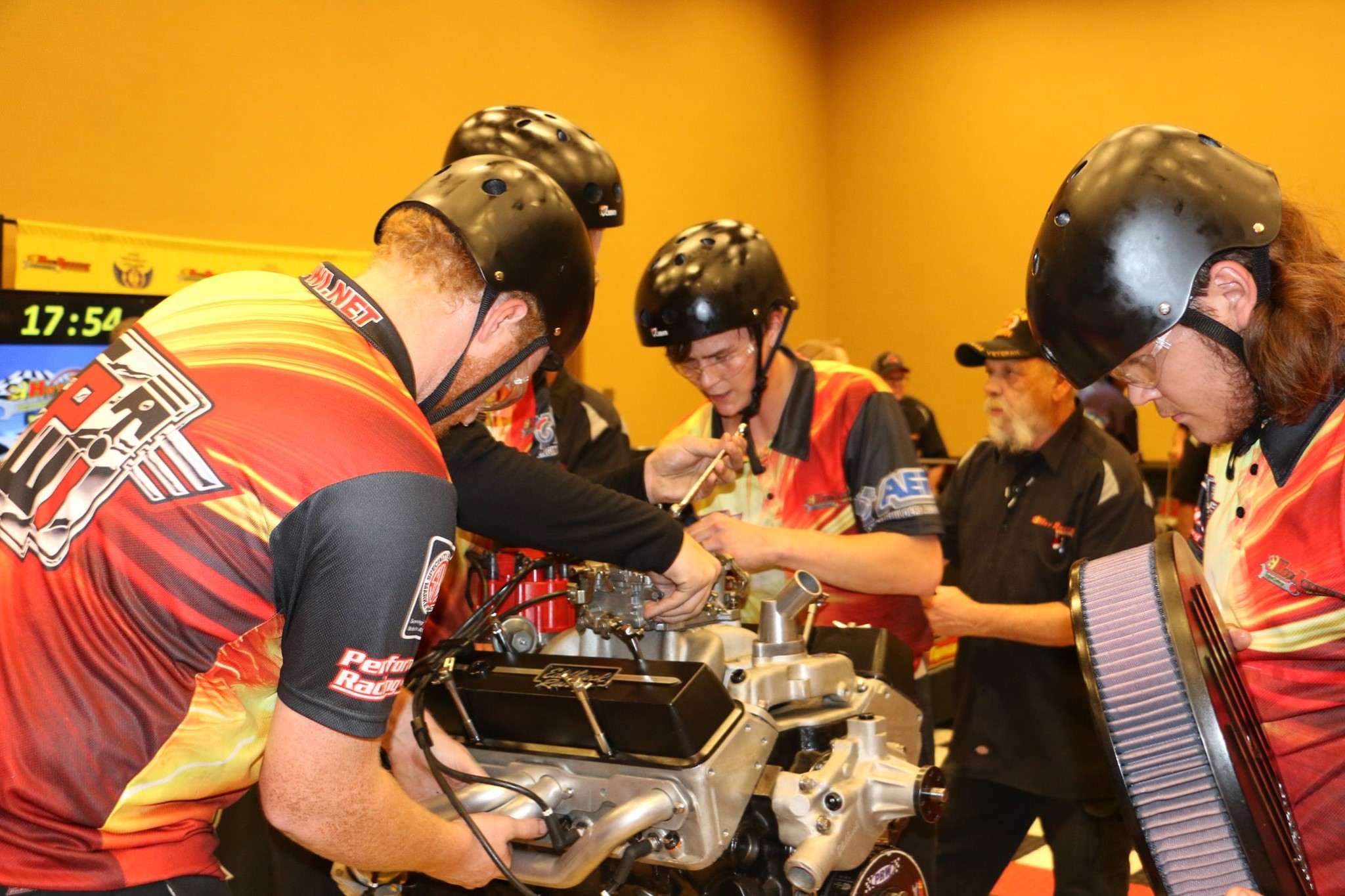 PTC Auto Students brought home the 4th place trophy at the Hot Rodders of Tomorrow 2019 Elite 10 Championship in Indianapolis, IN last week. The Elite10 competition brings the top talent from high schools and tech centers across the United States to compete against each other in the engine challenge. During the event, students completely break down and reassemble an engine, testing their skills, timing, accuracy, and team communication. Along with the trophy and bragging rights, the team members have accumulated nearly $25,000 in scholarships each to further their training at their choice of sponsored trade schools across the United States.
‍
In 2019, approximately 150 competitors were narrowed down to the top 25 who competed in Las Vegas at the Dual National Championship SEMA show in November. At the SEMA event, PTC qualified 3rd and were one of five teams selected to advance to the championship competition called “The Elite 10.”  “We’re extremely proud of our accomplishments at this event. The staff at Hot Rodders of Tomorrow bragged on us the two days we were there, saying they’d never seen a school make it this far in such a short period of time. This is only our third year to participate in the competition,” said Nathan Dial, PTC’s Automotive Instructor. This has been a long road for the team members and they’ve put in the time and hard work required to become one of the top engine challenge teams in the nation. Dial says, “Our students showed incredible dedication and persistence throughout the entire process of this journey…even practicing during Thanksgiving break. I couldn’t be more proud of these guys!”
‍
Team members include, Ethan Adams (Tupelo H.S.), Dusty Boling (Sasakwa H.S.), Jacob King (Tupelo H.S.), Chandler Miller (Tupelo H.S.), Logan Wilson (Byng H.S.), and Wes Hardin, Alt. (Allen H.S.). Dial also said, "We couldn’t have done it without the help of sponsors attending these events throughout the year. Thank you to PTC’s David Lassiter and Jared Griffin for your continued support and efforts on behalf of the team! We’d also like to say a big thanks to everyone who cheered us on!”